During a desperate war against an alien race known as the Jobgar, humanity masters their technology and wins the war. But what we learn from the captured ship terrifies us all over again - the Jobgar are mortally desperate to colonize other worlds. They will send another invasion force, but probably much more formidable. Humanity bands together to create a ship, called Envoy 82, to send a team of our best people to the alien home world in an attempt to stave off the inevitable, catastrophic war. It will take the crew sixteen months to reach their destination, may the gods be with them...

Envoy 82 is a sci-fi comic series with seven issues. The entire series is free! 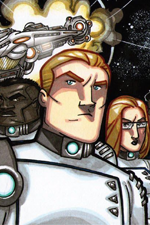 If you are interested in some of the making of, you can read my blog about it here: Envoy 82 – Plotlining from the End Backwards.